ON THIS DAY IN CAPITOL RECORDS HISTORY
1947 - Wingy Manone and His Orchestra (Manone on trumpet; Charlie Griffard, Zeke Zarchy, and Ray Linn on trumpet; Bill Schaefer, Allan Thompson, and Carl Loeffler on trombone; Heinie Beau on clarinet; Fred Stulce and Leonard Hartman on alto saxophone; Herbie Haymer and Ted Nash on tenor saxophone; Moe Weschsler on piano; George Van Eps on guitar; Jack Ryan on bass; and Nick Fatool on drums) record the track "Box Car Blues", with Manone sharing vocals with Johnny Mercer, in Los Angeles, California which will be released as a single by Capitol Records with "Hello Baby" on the flip side. At the same session, The Pied Pipers, with Paul Weston conducting the same musicians (except for Wingy Manone), record the tracks "Just Plain Love" and "The Riddle Song" which Capitol Records will release together as a single.
1952 - Louis Bellson Just Jazz All Stars (Clark Terry on trumpet; Juan Tizol on valve trombone; John Graas on french horn; Willie Smith on alto saxophone; Wardell Gray on tenor saxophone; Harry Carney on baritone saxophone; Billy Strayhorn on piano; Wendell Marshall on bass; Louis Bellson on drums) record the tracks "The Jeep Is Jumpin'", "Passion Flower", and "Johnny Come Lately" (all three arranged by Strayhorn), "Sticks" and "Punkin'" (both arranged by Shorty Rogers), "Eyes" (arranged by Buddy Baker)", Rainbow" (arranged by Tizol), and "Shadows" (also arranged by Baker) in Los Angeles, California. All the tracks will be released on a 10" album by Capitol Records as part of it's "Classics in Jazz" series.
55 Years Ago Today In 1953 - Les Baxter and His Orchestra's Capitol Records single "April in Portugal" is #2 on Billboard's Best Selling Retail Singles chart, Nat "King" Cole (with Nelson Riddle and His Orchestra)'s single "Pretend" is #9, Jane Froman (with Orchestra conducted by Sid Feller)'s Capitol Records single "I Believe" is #11, and Les Baxter and His Orchestra's Capitol Records single "Ruby (theme from the movie Ruby Gantry)" enters the chart at #20
1960 - The Four Prep's Capitol Records single "Got A Girl" is #24 on Billboard's Hot 100 Singles chart
1964 – Capitol Records releases The Beach Boys' single “I Get Around” with “Don’t Worry Baby” on the flip side
1965 - The Beach Boys' Capitol Records single "Help Me Rhonda", with "Do You Wanna Dance?" on the flip side, hits #1 on Billboard's Hot 100 Singles chart
1967 - Buck Owens's Capitol Records single "Sam's Place" is #1 on Billboard's Hot 100 Singles chart
1967 - The Pink Floyd records Syd Barrett's "See Emily Play" at Sound Techniques Studios in England. The track will later be released in the United States on Tower Records, a subsidiary of Capitol Records.
1970 - Paul McCartney's Apple Records album "McCartney", distributed by Capitol Records in the United States, reaches #1 on Billboard's Top 200 Albums chart
1994 - The Beastie Boys' Grand Royal and Capitol Records album "Ill Communication" is released and will become their second #1 album and second album to be certified triple platinum
1996 - Capitol Records Nashville releases Suzy Bogguss's first single for the newly renamed label, "Give Me Some Wheels" with "Far And Away" on the flip side

ON THIS DAY NOT QUITE IN CAPITOL RECORDS HISTORY
125 Years Ago Today In 1883 - Douglas Fairbanks, Sr., motion picture actor and co-founder of United Artist Pictures which would go on to create United Artists Records, is born Douglas Elton Ulman in Denver, Colorado
1960 - Rick Nelson's Imperial Records single "Young Emotions" is #16 on Billboard's Hot 100 Singles chart and Dion and The Belmont's Laurie Records single "When You Wish Upon A Star" is #30. EMI Music Group, Capitol Music Group's parent company, currently owns the Imperial and Laurie Records catalogs.
1969 - Jimmy McHugh (born James McHugh), composer ("I Can't Give You Anything But Love", "On The Sunny Side Of The Street", "I'm In The Mood For Love", etc.) and pianist, dies in Beverly Hills, California at age 74. Capitol Records released a CD compilation of various Capitol Records artists covering McHugh's songs as part of it's "Capitol Sings" series.
1971 - The Rolling Stones' single "Brown Sugar", with a cover of Chuck Berry's "Let It Rock" on the flip side, hits #1 on Billboard's Hot 100 Singles chart. The Rolling Stones' catalog is now released by Virgin Records, a subsidiary of Capitol Music Group's parent company EMI Music Group
25 Years Ago Today In 1983 - Pink Floyd's Columbia Records album "The Final Cut" is certified Gold by the R.I.A.A. Pink Floyd's entire catalog is now distributed by Capitol Records in the United States
2006 - The complete "Bugaloos" is released on DVD. 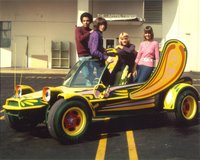 The Bugaloos with their Barris Custom buggy at the back entrance of The Capitol Tower. Photo courtesy of Bill Ung 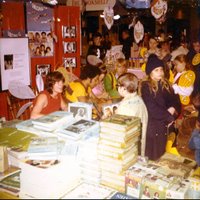 Rhino Video releases a 3 DVD set with all 17 original episodes of the series, as well as some great extras. In 1970 Capitol Records released The Bugaloos only album and sponsored a promotional tour of in-store and personal appearances to support it. Bill Ung has a wondeful and massive tribute website to The Bugaloos and I've contributed some photos from the personal appearances in Pittsburgh, Pennsylvania and Dallas, Texas, to it.

ON THIS DAY NOT IN CAPITOL RECORDS HISTORY
1910 - Artie Shaw, clarinet player and bandleader, is born Arthur Jacob Arshawsky in New York City, New York
1944 - Tiki Fulwood, drummer for the bands Parliament and Funkadelic, is born Ramon Fulwood in Philadelphia, Pennsylvania
40 Years Ago Today In 1968 - John Lennon and George Harrison open Apple Tailoring (Civil And Theatrical) at 161 King's Road, London, England
Posted by markhn at 6:38 AM