HAPPY BIRTHDAYS!
1944 - Graham Goble, guitarist with the Capitol Records group The Little River Band, is born in Adelaide, Australia
1951 - Jonathan Richman, singer, songwriter, founder of the band The Modern Lovers, solo artist, Capitol Records artist (on the motion picture soundtrack to "There's Something About Mary"), is born in Boston, Massachusetts 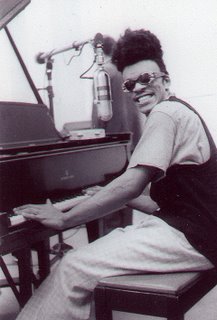 1958 - Paul Peek and Gene Vincent "discovery" and major influence on Little Richard, Esquerita (Eskew Reeder, Jr.), starts a two day recording session at RCA Studios in Nashville, Tennessee, his first as a Capitol Records artist. On this day, between 7:00 pm and 11:00 pm, Esquerita, on piano and vocals with Andrew Lee Goodrich on tenor saxophone, Vincent Moses on guitar, Floyd T. Chance on bass, Johnny "Richardo" Young on drums, records "Oh Baby" with Atlanta-based vocal group The Gardenias (Calvin Arnold, Carlton Sheppard, Jr., Lloyd White and William Dixon), "Please Come On Home", "Sarah Lee" and (again with The Gardenias) the first version of "I Live The Life I Love".
1961 - Faron Young's Capitol Records single "Hello Walls" is #29 on Billboard's Hot 100 Singles chart
1966 - Capitol Records is a sponsor of "A Tribute To Judy Holliday", a banquet to benefit The American Medical Center in Denver, Colorado.
45 Years Ago Today In 1967 - Buck Owens' Capitol Records single "Sam's Place" is #1 on the U.S. Country singles charts
1970 - Harvest Records (a subsidiary of Capitol Records) band Pink Floyd perform a two-and-a-half-hour set at Crystal Palace in England, complete with fireworks and fifty-foot inflatable octopus, that is so loud that fish die in the nearby lake
40 Years Ago Today In 1972 - Glen Campbell's Capitol Records compilation album "Greatest Hits" is certified Gold by the R.I.A.A.
1976 - The Sylvers' Capitol Records single "Boogie Fever", with "Free Style" on the flip side, becomes Capitol Records first R&B single to hit #1 on Billboard's Hot 100 Singles Chart
1994 - John Berry's Liberty Records (later renamed Capitol Records Nashville) single "Your Love Amazes Me", with "What's In It For Me" on the flip side, is #1 on the U.S. Country singles chart
2011 - Bob Flanigan, original lead singer for the Capitol Records group The Four Freshmen, passed away just before 10pm at his home in Las Vegas at age 84 of congestive heart failure. He was with several generations of his family and died peacefully with jazz music playing softly. Earlier in the afternoon, Rod Henley and a group of Vegas musicians came by his home and played for him, so music was a big part of Bob's last day on earth.

ON THIS DAY NOT IN CAPITOL RECORDS HISTORY
1945 - Billboard publishes its first album chart. At the time, an album consisited of more than one 78rpm shellac disc held in paper sleeves in a binder.
1963 - Astronaut Leroy Gordon Cooper orbits the Earth 22 times aboard Mercury 9 spacecraft "Faith 7"
Posted by PopCultureFanBoy at 12:43 AM