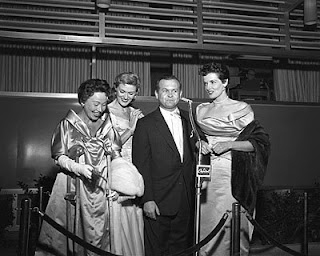 Connie Haines, Beryl Davis, Johnny Grant, Jane Russell
5 Years Ago Today In 2008 - Connie Haines, singer, motion picture actress, lead female vocalist with the Tommy Dorsey Orchestra, and a Capitol Records artist who, as a featured vocalist with Gordon Jenkins and his orchestra, was part of the first 9 singles released by Capitol Records (#106—"He Wears A Pair Of Silver Wings" with "I’m Always Chasing Rainbows" on the flipside) on July 1, 1942 and later would be part of a Capitol Records gospel trio with Beryl Davis and Jane Russell with whom she attended the opening night ceremonies for The Capitol Tower, has died of myasthenia gravis at age 87 in Clearwater Beach, Florida.

ON THIS DAY NOT QUITE IN CAPITOL RECORDS HISTORY
1954 - Shari Belafonte, singer, motion picture and television actress, and daughter of one-time Capitol Records artist Harry Belafonte, is born in Hackensack, New Jersey
1964 - The musical "Fiddler On The Roof" opens at Imperial Theatre on Broadway starring Zero Mostel, whose previous show "A Funny Thing Happened On The Way To The Forum"'s cast album was released on Capitol Records. The cast also features Bert Convy, formerly a member of the Capitol Records group The Cheers and later better known as a game show host.
1964 - NBC-TV premieres "The Man From U.N.C.L.E" starring Robert Vaughn and future Capitol Records artist David McCallum
1972 - Sonny James' first single for Columbia Records after leaving Capitol Records, "When The Snow Is On The Roses" with "Love Is A Rainbow" on the flip side, is #1 on the U.S. Country singles charts
1980 - John Lennon and Yoko Ono become the first act to sign a distribution deal for their LENONO Music label with Geffen Records which will release their upcoming album "Double Fantasy"
1984 - John Waite's EMI America single "Missing You", with "For Your Love" on the flip side, is #1 on Billboard's Hot 100 singles chart
1989 - Irving Berlin (born Israel Isidore Baline), songwriter whose compositions have been covered by many of Capitol's artists which were the souce for the tribute album "Puttin' on the Ritz: Capitol Sings Irving Berlin" released on CD on August 17, 1992, dies at age 101 of a heart attack in New York City and is later interred the Woodlawn Cemetery, The Bronx, New York

ON THIS DAY NOT IN CAPITOL RECORDS HISTORY
1960 - Joan Jett, guitarist, singer, member of the band The Runaways and solo artist, is born Joan Marie Larkin in Philadelphia, Pennsylvania
Posted by PopCultureFanBoy at 12:57 AM