HAPPY BIRTHDAYS!
1929 - Chet Baker, trumpetist, flugelhorn player, singer, and Pacific Jazz and Capitol Records artist as a solo artist and as a member of the Gerry Mulligan Quartet and Quintet and with the Miles Davis nonet, is born Chesney Henry Baker in Yale, Oklahoma
1955 - Dave Murray, songwriter and guitarist with the EMI/Harvest/Capitol Records band Iron Maiden, is born David Michael Murray in Edmonton, London, England 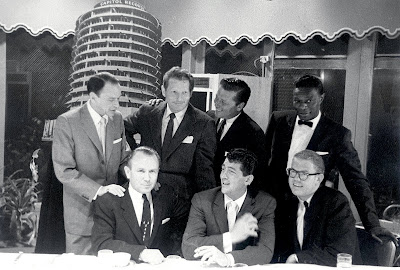 At a Friars' Club Roast for Glenn Wallichs - date unknown.
Rear: Frank Sinatra, Danny Kaye, Gordon MacRae, and Nat Cole
Front: Glenn Wallichs, Dean Martin, and Stan Freberg
1971 - Capitol Records co-founder Glenn Everett Wallichs dies at age 61 in Los Angeles, California from a rare form of bone cancer. He is later buried at Forest Lawn Memorial Park (Hollywood Hills), in the Eternal Love section, Map E24, Lot 5590, Interment Space 1.
1972 - John Lennon's film "Imagine" premieres on national TV
1972 - Hurricane Smith (aka Norman Smith, EMI recording engineer at Abbey Road who worked with The Beatles and producer of Pink Floyd's second single "See Emily Play")'s Capitol Records single "Oh Babe, What Would You Say?" with "Getting To Know You (Is Like A New Dance)" on the flip side, debuts in the top 40 of both Billboard's Hot 100 Singles chart and Cashbox's Top 100 Singles chart. On a personal note, this is my favorite song. When if first came out I was 12 and it sounded so different from anything else on the radio at that time. Also, it was a song my whole family liked and would sing along to while driving around Buffalo that winter (having a song that the kids' singing wouldn't sound worse than Smith's vocals was a real plus for my parents). With it's lush string arrangement, smoking sax solo, and romantic (but down to earth and easy to understand) lyrics, this was also the song that started my interest in "earlier" music. Many thanks Norman!

ON THIS DAY NOT QUITE IN CAPITOL RECORDS HISTORY
75 Years Ago Today In 1938 - The "Spirituals To Swing" concert is presented at Carnegie Hall in New York City by music impresario John Hammond. Pianists Meade Lux Lewis, Albert Ammons, and Pete Johnson, vocalist Joe Turner, clarintetist Sidney Bechet, the Count Basie Orchestra, blues singer Big Bill Broonzy, and gospel singer Sister Rosetta Tharpe all appear on stage. The show is credited with starting the "Boogie Woogie" craze. Also, twenty nine year old Alfred Lion is in the audience and is so enthused by Lewis and Ammon's piano playing that he arranges a recording session, funded with start-up capitol by writer Max Margulis, exactly two weeks later on January 6, 1939 at 2:00 PM (listed as probably being at WMGM Studios) in New York City where he records 4 solos by each and 2 duets with both men playing on the same piano. Thus is Blue Notes Records born. Blue Note's catalog is currently owned by EMI Music, Capitol's parent company, and Blue Note Records is currently a division of Capitol Records, Incorporated. If anyone knows for sure which studio was used, please leave a comment.
Posted by PopCultureFanBoy at 12:11 AM