ON THIS DAY NOT QUITE IN CAPITOL RECORDS HISTORY
1967 - Jackie McLean (on alto saxophone, with Grachan Moncur III on trombone, Lamont Johnson on piano, Scotty Holt on bass, and Billy Higgins on drums) records the tracks "Hipnosis", "Slow Poke", "The Breakout", "Back Home" and "The Reason Why" at Rudy Van Gelder's studio in Englewood Cliffs, New Jersey. Blue Note Records will issue all the tracks on McLean's album "Hipnosis" (BN-LA483-J2) and Mosaic Records will issue all the tracks on the Mosaic Select CD "Grachan Moncur" (MS-001).

ON THIS DAY NOT IN CAPITOL RECORDS HISTORY 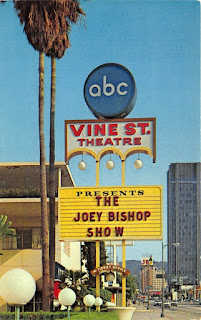 100 Years Ago Today In 1918 - Joey Bishop, comedian, writer, motion picture and television actor, and member of "The Rat Pack", is born Joseph Abraham Gottlieb in The Bronx, New York
80 Years Ago Today In 1938 - Victor Buono, television and motion picture actor (best remembered as King Tut on ABC-TV's "Batman" series) is born Victor Charles Buono in San Diego, California
1959 - After performing at The Surf Ballroom in Clear Lake, Iowa, Buddy Holly (age 22), The Big Bopper (aka Jiles Perry Richardson, Jr., age 28), Richie Valens (age 17), and pilot Roger Peterson (age 21) are killed when their chartered Beech-Craft Bonanza airplane No. N3794N crashes near the Mason City, Iowa Airport at around 1:00 AM CST. Waylon Jennings, bass player for Buddy Holly, gave his seat on the plane to The Big Bopper, due to the Bopper's illness. Another Holly band member, Tommy Allsup, flips Valens for the last available seat, losing the coin toss. United Artists Records artist Don McLean will later remind listeners of the event in his song "American Pie".
1960 - Frank Sinatra forms his own label, Reprise Records, now a part of the Warner Music Group
1961 - At his first recording session (held at the home of his friends Sid and Bob Gleason at East Orange, New Jersey), Bob Dylan records the tracks "San Francisco Bay Blues" and "Jesus Met The Woman At The Well"
Posted by PopCultureFanBoy at 3:09 PM